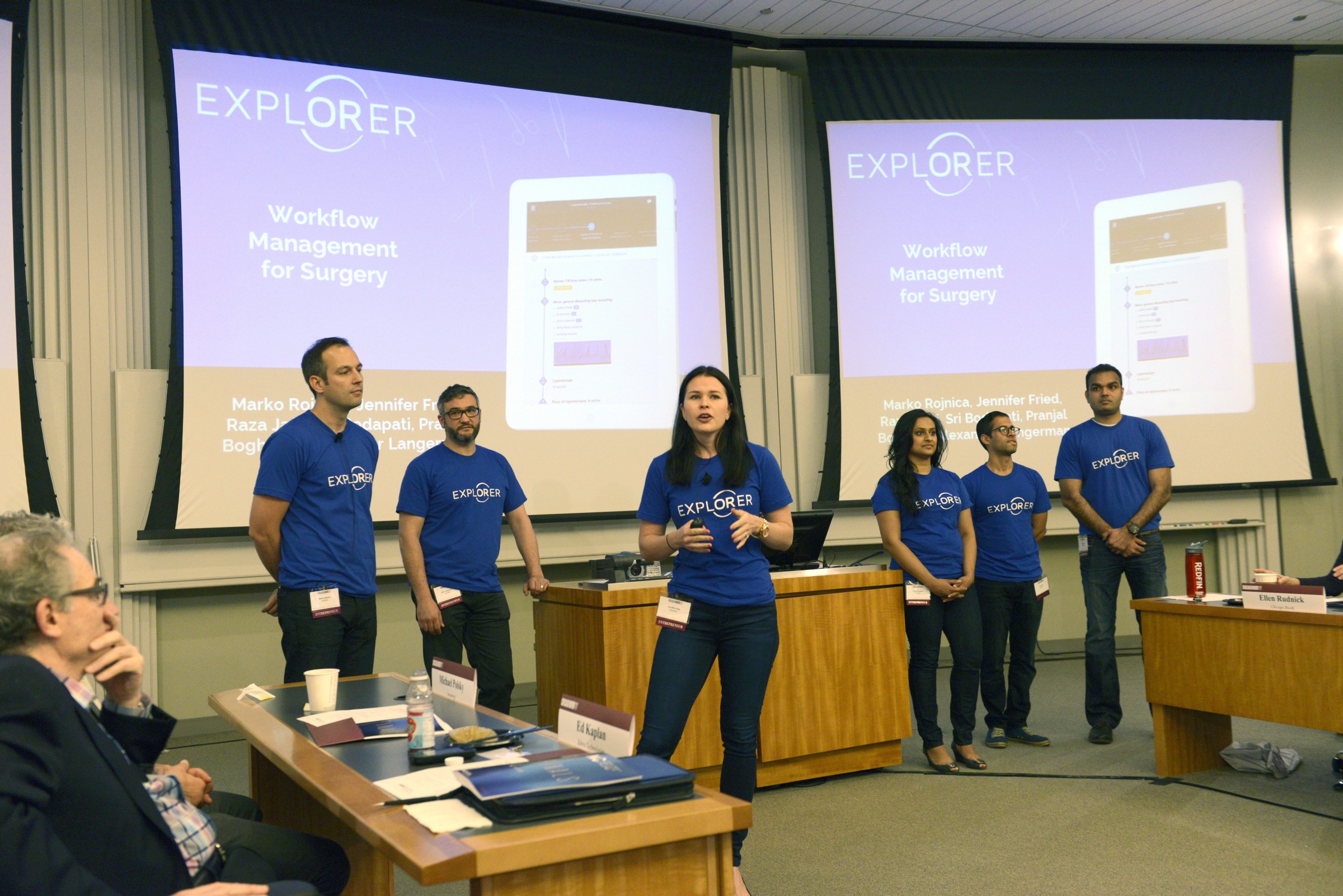 Our CEO Jennifer Fried gives her take on what we have learned in the last year, what ExplORer offers to surgical teams, and where the industry is heading.

Where did we start….and where are we now?

I met my co-founder Dr. Alex Langerman in 2013. Alex had begun ExplORer as a research project at the University of Chicago in 2011. Together, we aimed to realize ExplORer’s commercial potential.

We hired Chief Technology Officer (CTO) Eugene Fine to build an alpha version of the software platform, obtained initial funding and a grant from the National Science Foundation, and then I moved from my job as a healthcare venture capitalist to focus full-time on running the business.

What have we learned in the last year?

It’s all about the team, not about the specialty.

Operating room (OR) teams make errors when breakdowns in communication and situational and procedural awareness occur. Errors may include unnecessarily opening a disposable tool or even performing a step of the procedure incorrectly.

A surgeon who has worked with the same circulator and scrub on the same five to ten cases consistently for a decade has likely operationalized many of these challenges. However, that level of consistency is simply not a practical reality for most academic and community hospitals. In these settings, personnel turnover is high (cited at 15-20% annually), staffing is inconsistent, and teams are in constant flux.

We have found that it is not a matter of surgical specialty that determines whether workflow breakdowns occur; these problems occur whether it is general surgery or neurosurgery or orthopedics.

"OR teams make errors when breakdowns in communication and situational and procedural awareness occur."

When surgeons are in the room without their regular teams, their pain is palpable. It not only affects communication and morale, but it has tangible implications for hospital operations and patient safety.

In our 2017 research at a major Chicagoland academic medical center, in head-and-neck surgery, we found 8% of case time to be spent in delays often lasting 20 minutes or more. That’s 20 minutes of extra anesthesia for the patient and 20 minutes of OR time costing the hospital thousands of dollars.

Due to inconsistent team composition and high rates of turnover ― working off pre-operative preference cards that are analog, outdated, and not process-oriented ― we consistently see 5 to 10% of procedure time spent on preventable delays across specialties. We have also seen $200+ in open-and-unused supply waste.

Additionally, we witnessed nearly 65% of required trays of instruments going unused. Academic studies have even shown as much as 85% of instruments in a given tray needing to be resterilized. Given that the average tray has 50 instruments  at a cost of $0.51+ per instrument to resterilize, this is an average additional cost of nearly $22 per tray. Given that the average institution processes 50,000 trays per 10,000 cases, this waste adds up to over $1,000,000 of additional cost.

With regard to disposables, we also saw staggeringly high amounts of waste:

"There is an opportunity for tremendous savings for hospitals within the intraoperative arena."

Issues are prevalent even in high-volume specialties & procedures.

When we started, we knew that ExplORer would be valuable in complex cases. What we wanted to see was whether we could deliver value in high-volume--so-called “bread-and-butter” cases. Could we make a difference across enough of a hospital’s volume of surgical procedures to merit cultural change and justify the upfront investment required to change the way things are done? Hospitals have limited resources, both in terms of finance and human/personnel, and undertaking any new investment would require broad and significant return.

When we were awarded a National Science Foundation grant, we chose to study a high-volume, relatively “simple” procedure: the laparoscopic cholecystectomy.

What we found was that even for one of the highest volume procedures that teams were doing day-in and day-out, we could make a difference. Using ExplORer, we cut tool-related disruptions and delays, reduced setup time, and came close to entirely eliminating wasted disposables.

"Even for one of the highest volume procedures that teams were doing day-in and day-out, we could make a difference."

More recently, when we talked to a general surgeon, at a hospital that implemented standardization across its general surgery attendings, we still saw widespread issues arise from inconsistent staffing and subpar preparation.

This surgeon described his “bariatric trifecta of horror” in which three workflow inefficiencies that occur together:

We continue to see that even for high-volume specialties with regular teams, ExplORer can be useful in situations, such as:

It’s not just the OR that has challenges.

Furthermore, methodology and instrumentation are less known prior to opening the patient than they are in surgery. Likewise, team composition is more ad hoc―many IR suites direct patients to the next available interventionist and room, rather than pre-assigning cases to particular physicians.

Similar to the OR, staff may rotate across specialties in the interventional suite and cross-training is a challenge. Team members know their primary specialty well but not those of others. We hear stories of single team members “carrying the team,” such that when those individuals are away, procedural scheduling is pushed out, delaying the provision of needed care.  This exact situation created a week-long delay at a large community hospital in Dallas when a particular nurse was out on vacation.

"Similar to the OR, staff may rotate across specialties in the interventional suite and cross-training is a challenge."

There are very real financial implications when interventional staff open wrong instrumentation because they don’t thoroughly know the surgeon’s preferences. A catheter kit can cost nearly $100, and a port can run upwards of $400 (7).

Indeed, interventional areas―in which there is widespread variability and rotating staff―need a solution like ExplORer, not just financially and operationally, but also clinically to ensure that patient care is not compromised by dangerous coordination and communication breakdowns.

For example, an eye surgery center with five surgeons that only perform cataract and LASIK procedures or an orthopaedic center focusing on hips and knees would have more streamlined workflow and processes than a multi-specialty hospital setting.

This does not mean that surgery centers are immune to workflow challenges, but it makes it a secondary, not a primary market, for our team to address. The value-add from our team is more nuanced―when a new procedure shifts into the outpatient setting, when a new team member is onboarded, or when a new facility is opened.

We continue to work with local and national surgery centers to identify opportunities to codify best practices and share them in our digital playbook as we seek to support the highest quality of clinical care in every setting.

ExplORer provides the players in the OR with a digital guidebook that shows team members a step-by-step guide for their roles, complete with pictures and video of set-up, materials, and positioning. Traditional preference cards are analog lists of materials, with no information about process or chronology. They cannot be referenced live during operations, so it is difficult for nurses and techs to keep aligned with the progression of the case.

"Traditional preference cards are analog lists of materials―with no information about process or chronology―that cannot be referenced live during operations."

Our workflows can contain as much or as little detail as is desired. During use, our app also collects rich, and previously untapped, intraoperative time data. In doing so, we aim to reduce cost and waste, decrease unnecessary variability, and improve training─all of which amounts to improved patient care.

The Time for Change is Now; Surgical Teams and Hospital Administrators are Ready for New Tools.

Hospital profit margins are in the single digits. Given that the OR is the powerhouse of the hospital ─ representing approximately 50% of revenue, 55% of profit, and 35% of cost─hospitals cannot afford to perform fiscally in which sometimes supplies for a  given procedure cost $1,000 to $5,000 (8-10). This variable range of costs might happen across surgeons at a given institution; it may even happen for the same surgeon.

"The OR is the powerhouse of the hospital─representing approximately 50% of revenue, 55% of profit, and 35% of cost."

Surgical departments  see waste and care about it. The movement toward value-based care and bundled payments has increased the concern about continued waste and inefficiencies.

This problem has been around for the past 30 years and operative teams are sick of it. We spoke to a surgeon who had fifteen versions of the preference card for one of his relatively simple procedures. We spoke to another surgeon who said he had been trying to get a particular stapler off his preference card for 18 months. Unless he had a scrub who knew his procedure well or was in the room during preoperative prep, the unnecessary stapler would be billed to the patient. Additionally, as the industry progresses, surgical teams will not tolerate critical personnel leaving the OR when proper materials are forgottenーthis puts patients at increased risk for infection by airborne bacteria.

When I first proposed bringing electronic tablets into the OR in 2013, hospital administrators thought the idea was absurd. Now, hospitals embrace new technology in the OR―an example of which is Gauss Surgical’s intraoperative blood loss tracker and iPad app monitor. The technology question we now receive most often is whether ExplORer is compatible with both iOS and Android!

The Entire Industry is Paying Attention.

Everyone is paying attention to the OR. Should hospitals use RFID tags on instruments to better track them? Should medical device companies, purchase innovative OR solutions (see Stryker’s purchase of Surgicount’s surgical sponge tracking solution)? Should group purchasing organization engage in OR-based consulting?

We are going to start to see device companies working with supply chain companies, hospital associations, and EMRs. We all need to come together. Choose ExplORer as the operating system for the OR to speed the integration of technology into the operative ecosystem.

(2) This number was derived as follows:

We can save $1M by reducing wasted sterilized instruments.

(3) This number was derived as follows:

We can save $2M by reducing open & unused disposables.

(5) Research at a major academic medical center revealed extra supplies were often opened unnecessarily, resulting in up to $1100 wasted supplies for the 47 Plastic, Bariatric, and Neurosurgery cases we observed (mean $204, range $7 - $1113).

(8) We roughly averaged numbers from the following sources:

(9) We roughly averaged numbers from the following sources:

(10) We roughly averaged numbers from the following sources:

Schedule a call with our team

Fill out the form below, and a member of our team will be in touch soon.